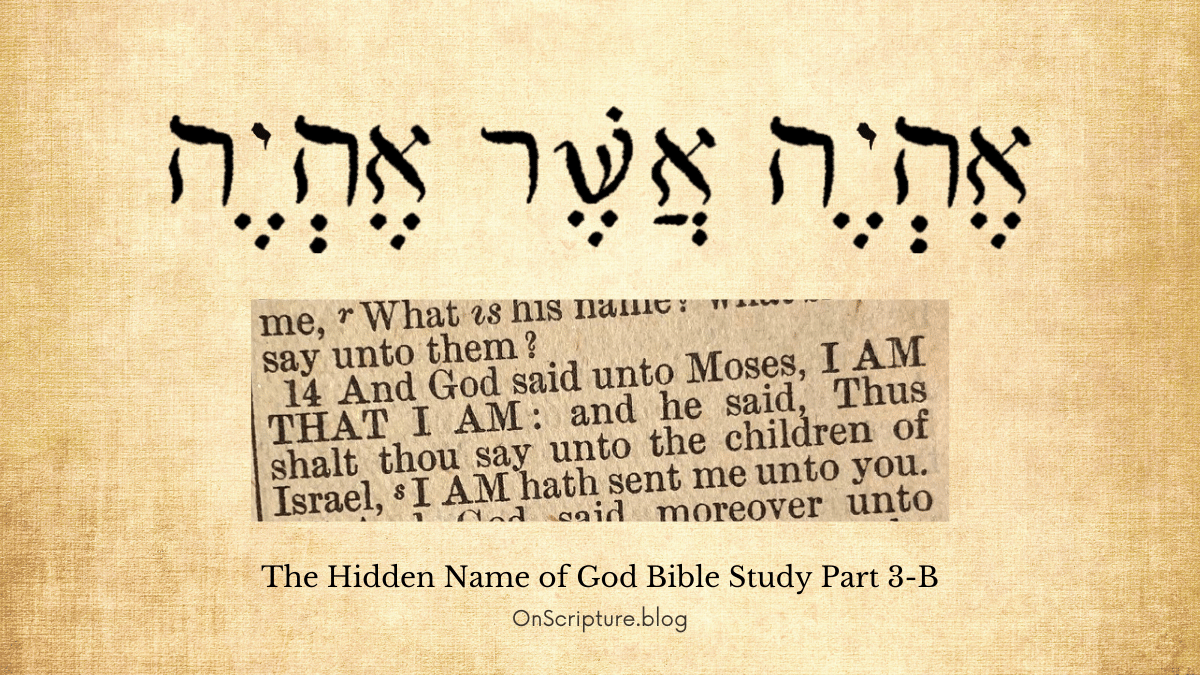 In our last session, we saw how God’s unique, personal name reveals His eternal nature. We even had a Hebrew grammar lesson to help us understand what Hebrew speakers, then and now, can see from the structure of the Name. He was, He is, He will be – woven into the very spelling of His name. “O LORD, our Lord, how majestic is Your name in all the earth!” Psalm 8:9 ESV

In this portion of our study, we will take a look at how the Targum expresses the Ehyeh Asher Ehyeh—אֶהְיֶה אֲשֶׁר אֶהְיֶה. But first, what is the Targum?

Targum— תרגום—is the transliteration of an Aramaic word meaning interpretation, translation, or version. A targum is an Aramaic translation, or more precisely, an explanation of the Hebrew Scriptures. Aramaic was the language spoken by the Babylonians and the Hebrew exiles learned it from them during their captivity. When the exiles began to return to Jerusalem during the time of Ezra and Nehemiah (6th-5th centuries BC), many of the Jews no longer spoke or understood Hebrew. We see the first use of interpreting Hebrew into Aramic in the book of Nehemiah, when Ezra read from the Torah to the returned exiles after the completion of the wall in Jerusalem. This is found in the 8th chapter of Nehemiah. Ezra, the scribe, read aloud from the Torah to all the people, men and women, in the open square before the Water Gate. He stood on a raised platform with a number of men on either side of him. Some of the Levites helped the people to understand what was being read.

”So they read distinctly from the book, in the Law of God; and they gave the sense, and helped them to understand the reading. And Nehemiah, who was the governor, Ezra the priest and scribe, and the Levites who taught the people said to all the people, ’This day is holy to Yehovah your God; do not mourn nor weep.’ For all the people wept, when they heard the words of the Law.”
Nehemiah 8:8-9 NKJV (emphasis mine)

The Jewish Publication Society translation of this passage is—

”They read from the scroll of the Teaching of God, translating it and giving the sense; so they understood the reading. Nehemiah the Tirshatha, Ezra the priest and scribe, and the Levites who were explaining to the people said to all the people, ’This day is holy to the LORD (Yehovah) your God; you must not mourn or weep,’ for all the people were weeping as they listened to the words of the Teaching.”
Nehemiah 8:8-9 JPS (emphasis mine)

More than likely, you have seen this type of interpretation done. We see it regularly on the news when someone interprets spoken words, in real time, into American Sign Language for the deaf. When I was a little girl, my family attended a Chinese Church and this happened every week, as the pastor would speak a few sentences in English for those of us who spoke English and then repeat them in Chinese for the Chinese congregation. This is more than likely what was happening as Ezra read from the Hebrew scroll. The Levites acted as interpreters and spoke the passage in Aramaic for those who did not understand Hebrew any longer.

When this practice began and for a great many years afterward, the targum was not allowed to be written down for fear that it would come to hold the same weight as the Hebrew Scriptures. Eventually, they were recorded.

From sometime around the beginning of the Christian era, until the time of the Muslim conquest of Israel, when Arabic was introduced, the Targum was read alongside the Hebrew Scriptures in Jewish synagogues. A verse or two would be read in Hebrew and then read in Aramaic from the Targum. This was done for the benefit of the many people in attendance who did not speak Hebrew. It was being replaced by Aramaic and by the 3rd century AD only the peasants spoke Hebrew. There are a number of Targums, but two—Babylonian (aka, Onkelos) Targum and Jerusalem Targum, are more widely known. The Jerusalem Targum was written in a Galilean dialect of Aramaic. These paraphrastic translations basically tell the reader what the verse means or how it is interpreted rather than the literal meaning (see ”gave the sense, and helped them understand” in Neh 8:8 above). The Jerusalem Targum is more paraphrastic; the Babylonian is more literal. There are a number of English paraphrases of the Bible popular today, such as the Message Bible, the New Living Translation, the Good News Bible, and while they can help readers get a sense of the meaning, I do not recommend them as study bibles (but that is a topic beyond the scope of this study!).

I AM THAT I AM in the Targum

Take a look at how the Jerusalem Targum translates I AM THAT I AM.

אֲנָא הוּא דַהוֵינָא וַעְתִיד לְמִיהוֵי
I am he, that I was, and in the future am to be.
The Jerusalem Targum of Ehyeh Asher Ehyeh in Exodus 3:14

This paraphrase essentially skips ahead to verse 15 and gives the meaning of YHVH.

Look at this verse from Deuteronomy 32 and the unusual way the Targum Pseudo-Jonathan paraphrases it:

“See, now, that [I am he that is, and I was, and I am he that in the future am to be] and there is no other god besides me…”
The Targum Pseudo-Jonathan of Deuteronomy 32:39a

The Hebrew in the above verse is “Ani, Ani hu” (אני אני הוא). This literally means I, I am he.

The portion in brackets in the verse from the Targum Pseudo-Jonathan above paraphrases “I, even I, am he,” but it seems to be paraphrasing the “I AM…” of Exodus 3:14 as the Jerusalem Targum did above, even though the Hebrew in Deuteronomy used different words for “I am he.” This confirms that the translators of the Targum understood the eternal nature of Yehovah that was imbedded in His name and implied in His other “I am” statements.

Here is another verse from the Hebrew scriptures where Yehovah shows His eternal existence:

The Hebrew here is: Ani rishon v’ani acharon – אני ראשון ואני אחרון. By saying, “I am first and I am last,” Yehovah is saying that He was God before the world was created and He will be God in the world to come.

Yehovah’s eternal nature is expressed in a medieval prayer poem that has been sung in synagogues around the world since possibly the 9th or 10th century. Adon Olam means Eternal Lord in Biblical Hebrew. In Modern Hebrew it can be translated Lord (or Sovereign) of the Universe. It has its roots in the Jerusalem Targum. We briefly looked at the chorus last week. Here is a larger portion of this poem:

Eternal Lord (of the Universe) who was king, before any creature was created.
At the time all was made through his will, as king his Name was called.
And after everything is completed, he will be king alone with awe.

In his Temple, my soul will sing, may he send his Messiah soon,
And then we will sing in my [sic] holy house, Amen, Amen, oh, awesome Name!
Adon Olam, Sephardic Community of Constantinople, 1863

This chorus uses the very Hebrew words we looked at last week that make up the name Yehovah (YHVH—יהוה) and which explain what His name means. This poem, sung for centuries by Jewish people the world over, shows that even today they understand the eternal nature of Yehovah, and though they may no longer speak it, they have knowledge of His name!

Then Abraham planted a tamarisk tree in Beersheba, and there called on the name of the LORD, the Everlasting God.
Genesis 21:33

The eternal God is your refuge, and underneath are the everlasting arms…
Deuteronomy 33:27a

Before the mountains were brought forth, or ever You had formed the earth and the world, even from everlasting to everlasting, You are God.
Psalm 90:2

Your throne is established from of old; You are from everlasting.
Psalm 93:2

Blessed be the LORD God of Israel from everlasting to everlasting! And let all the people say, “Amen!” Praise the LORD!
Psalm 106:48

Who has performed and done it, calling the generations from the beginning? I, the LORD, am the first; and with the last I am He.
Isaiah 41:4

Are You not from everlasting, O LORD my God, my Holy One?
Habakkuk 1:12a

For since the creation of the world His invisible attributes are clearly seen, being understood by the things that are made, even His eternal power and Godhead, so that they are without excuse,
Romans 1:20

Now to the King eternal, immortal, invisible, to God who alone is wise, be honor and glory forever and ever. Amen.
I Tim 1:17

…in hope of eternal life which God, who cannot lie, promised before time began…
Titus 1:2

Jesus Christ is the same yesterday, today, and forever.
Hebrews 13:8

“I am the Alpha and the Omega, the Beginning and the End,” says the Lord, “who is and who was and who is to come, the Almighty.”
Revelation 1:8

“I am the Alpha and the Omega, the Beginning and the End, the First and the Last.”
Revelation 22:13

(These scriptures just scratch the surface of the revelation of God’s eternal nature in His holy Word. You can find many more verses through online Bible helps, concordances, and internet searches.)